Greater Cambridge Partnership is proposing to build a new 'Greenway' route between Waterbeach and Cambridge for pedestrians, cyclists and equestrians.  This is part of a wider project to build a network of 12 new Greenways to connect local villages to Cambridge.  Waterbeach Cycling Campaign have met with the Greenways team several times over the past 18 months, and have provided input into the design.  We are really impressed with the proposed route, and look forward to having a new route linking Waterbeach to Cambridge.
More information on the scheme can be found here and here.  This is currently open for consultation until Monday December 3rd 2018.  We would encourage all of you to submit your comments to the scheme by filling out the online survey form or by  sending an email to consultations@greatercambridge.org.uk.
The Waterbeach Cycling Campaign response to this consultation is below.  Please feel free to use any of the text in your personal responses. 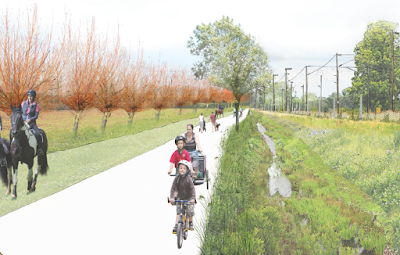 We strongly support the Waterbeach Greenways proposal, and welcome a new route to Cambridge, which will encourage more village residents to consider cycling as an everyday mode of transport.  The proposal will form an extension to other cycle routes, giving Waterbeach residents the ability to link to the Guided Busway route or the Chisholm Trail without encountering traffic.  The current options for cycling from Waterbeach to Cambridge are inadequate for commuter cycling (a narrow route along Hayling Way, by the river) and dangerous (a route directly alongside the A10 with traffic passing at 50mph), and the Greenway will provide a much better alternative.
We have some comments on the proposal which will improve the proposed plans:
1.       We strongly support the route alongside the railway track – this will provide a direct route for cyclists and pedestrians to reach Cambridge away from traffic.  We would like to see this route made wider (4m instead of 3m) and to be segregated rather than shared use, to improve safety for all users.  A similar style of route to the proposed shared use surface can be found on the ‘DNA route’ which runs adjacent to the railway between Addenbrookes and Great Shelford.  A WCC member used to live in Trumpington and noted that there was always conflict between walkers/cyclists/runners on this path, especially in the dark.  The Waterbeach Greenway will ultimately be as popular as the DNA path, and we would like to avoid similar conflicts.  Providing a ‘Cambridge kerb’ or similar to segregate cyclists from pedestrians would help reduce this conflict.
2.       Within the village, we would like to see more done to improve Greenside, Cambridge Road and High Street to improve conditions for cyclists.
·         The junction between High Street and Cambridge Road is very wide, and many cars barely slow down when turning into High Street. A reduction in the width of this junction would greatly reduce speed in the area.
·         There are many parked cars along Greenside and High Street, which push cyclists out into the middle of the road.  Removing the white lines down the middle of the carriageway and formalising the car parking into painted bays would help narrow the carriageway to reduce the speed of motor traffic and increase safety for cyclists using this route.
3.     We support the proposals for Traffic Calming on Car Dyke Road, with a 20mph zone and raised table where the Greenway crosses.  It will need to be made very clear to car drivers leaving and entering the village that cyclists have priority over cars. This will be a very big change to the current situation and will take some getting used to for car drivers.  Having cycle priority in this situation would be groundbreaking, but we want to make sure that it is managed in a way that is safe for cyclists using the crossing.
4.       We support the link along the Car Dyke, but suggest that a better route would be to follow the arable field boundary to the east side of the Car Dyke meadows.  Using this route would lead to less scrub clearance (the southern end of the Car Dyke meadows is thick scrub) and would have a lower impact on the grassland habitat of Car Dyke.
5.       Route A through the village is very indirect (it goes from the village, out to the A10 before coming back to the industrial estate).  We don’t consider this route to be very useful for many villagers, and we suspect residents from the north of the village would cycle down High Street (Route B) to reach the Greenway rather than using this route.  With improvements, this could be a better route - there is a field boundary running South from the industrial estate which may provide a more direct route in this area.  If there is a limited budget for the Waterbeach Greenway, we would like to see Routes B and C prioritised over Route A.
6.       We are strongly supportive of Route C, which will provide a direct link from the (consented) relocated station to the South of the village, as well as providing a direct route for new town residents to access the Greenway route to Cambridge.  Residents from the Station Road area of Waterbeach will be able to access the new station quickly and easily, without having to encounter vehicular traffic.  This is a really important route which will be instrumental in reducing car use within the village.
7.       The A14 underpass is an important feature of the proposals, and would make the route much more direct than going via the Jane Costen cycle bridge.
8.       Some people may have security concerns about cycling along the proposed Greenways route in the dark, and they may consider using the A10 cycle path as an alternative.  Urban and Civic (one of the Waterbeach New Town developers) has previously proposed upgrading the A10 path.  We would like to see this work carried out as well as the construction of the new Greenway, to provide an alternative route to Cambridge.